WEBINAR: How to *Actually* Measure Impact of Your L&D Programs

Accolade is a fast-growing healthcare technology company, committed to creating an exceptional employee experience.  To make this a reality, Accolade’s leadership team set out to create a coaching culture that supported all employees, while deepening leadership practices.

Accolade’s Executive Vice President of People and Culture, Britt Provost, and her team turned to peer coaching to create a coaching culture that was inclusive and scalable. By leveraging peers, rather than paid coaches, they were able to make coaching truly accessible to everyone and incorporate building coaching skills into the day-to-day flow of work. 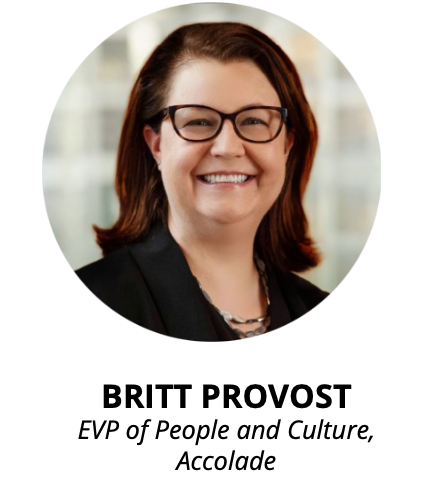 ‍
Instantly, the leadership team began hearing unprecedented and unprompted positive feedback.
‍
“We heard feedback right away from multiple leaders that their team said this was the most valuable thing they did all quarter for their personal development. Not only that it was easy, but it was so energizing and motivating. That was pretty revolutionary for us—and we knew that we have to do more of that.” Britt said.
‍
‍

Watch the Conversation with Britt

As EVP of People and Culture and a strong believer in the power of coaching, Britt’s goal was to ensure every employee had the opportunity to experience coaching. Traditional coaching wasn’t feasible to extend to all employees, but Britt’s goal was to find a way to make it accessible and help support all her people. She was looking for a solution that met these criteria:

1. Accessible to employees and requires no training
2. Easy to launch and administer virtually
3. Cost-effective to scale to all their employees
4. Based on proven research and science
5. Creates psychological safety and new networks of support

"This is more manageable than traditional coaching in so many ways — it's not one-to-many it's many-to-many. Helps reinforce the culture, brings people together and gets them motivated."

Accolade partnered with Imperative to create a new, sustainable program on the Imperative peer coaching platform, which enabled their employees to experience the power of coaching, while creating ongoing support and increased ownership.
‍
To launch peer coaching on Imperative’s platform, employees began by filling out our purpose profile, which was scientifically designed to establish what drives a person at work. Then, they were paired off using Imperative’s data-driven algorithm. In each bi-weekly conversation over video, Imperative dynamically generates questions that are personalized to the purpose profiles of each person. The ongoing conversations are each focused on empowering employees to craft their jobs around their purpose and on optimizing their relationships, impact, and growth.
‍
Employees commit to specific actions they want to take before the next conversation – moving from social to experiential learning. This intentional action and accountability can be directly connected to powerful behavior change and trackable growth. Then, each subsequent quarter, employees are matched with new peer coaches to continue the on-going process and build more new relationships across the organization.

1. Accessible to employees and requires no training
2. Easy to launch and administer virtually
3. Cost-effective to scale to all of their employees
4. Based on proven research and science
5. Creates psychological safety and new networks of support

“This is a different framework than professional coaching. For my company's size and shape, it's really hard to afford to do that. This is an opportunity for us to do something much more community based and more scalable while being incredibly effective and safe,” Britt said.

"This is more manageable than traditional coaching in so many ways — it's not one-to-many it's many-to-many. Helps reinforce the culture, brings people together and gets them motivated."

At the end of each coaching conversation, Accolade employees committed to one action they would take before their next session to make their work more fulfilling. 83% of those actions were completed and employees reported that 90% of them directly impacted their fulfillment at work.

"The questions felt organic and conversational. I was so shocked with the feedback of how good it made people feel—not only that it was easy but that it was incredibly energizing and motivating," Britt shared.

“You're building bridges. Peer coaching builds bridges in your culture and builds connective tissue in addition to those bridges."